Bowel cancer screening tests can save your parents’ life 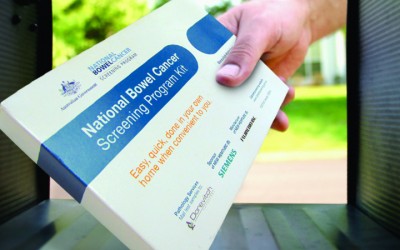 That bowel cancer screening “invitation” kit your parent got in the mail to isn’t junk mail. Don’t throw it out! It could save their life.

Currently around 80 people die from bowel cancer in Australia each week, but if caught early enough, 90 per cent of cases can be successfully treated. The Cancer Council and Australian Government Health websites have some great information on bowel cancer and the bowel cancer screening programme. We’ve included some highlights below.

When cells in the lining of the bowel grow too quickly, growths can form called polyps or adenomas. These growths are often benign, but can develop into bowel cancer over several years.

Symptoms of bowel cancer include:

Age is a risk factor for bowel cancer with those over 50 years old being at risk. Other risk factors include:

Your parent can reduce the risk of bowel cancer by:

The test that comes in the mail is called a Faecal Occult Blood Test (FOBT). An FOBT does not diagnose cancer on its own but looks for signs of polyps, cancer or other blood conditions which usually comes in the form of microscopic traces of blood in stools. If the FOBT is positive, a doctor will conduct other more comprehensive tests such as a colonoscopy.

Your parent will need to collect two stool samples (yes we mean poo) and post them using the reply paid envelope as soon as possible. While it sounds a bit gross, the kit comes with comprehensive instructions to make it as quick and clean as possible.

Video on how to use the National Bowel Cancer Screening Kit –  http://www.cancerscreening.gov.au/internet/screening/publishing.nsf/Content/bowel-campaign-pr-video#use