Teaching ageing parents to use a smartphone – you can teach an old mum new clicks! 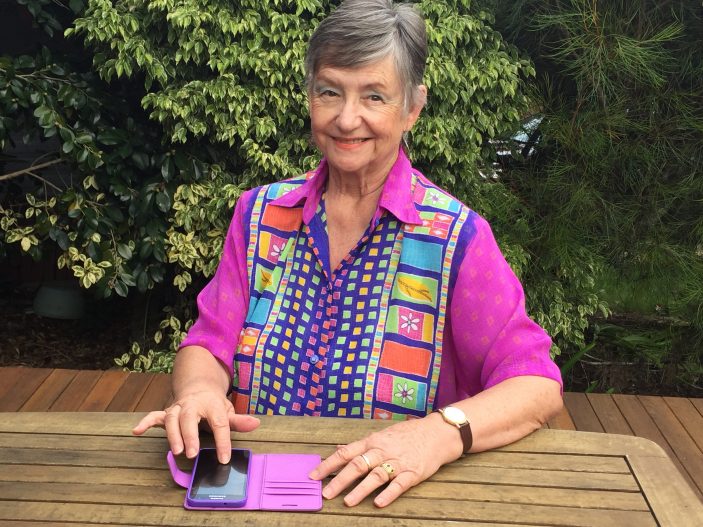 Technology can be an enabler in so many ways, but it can also be scary – especially for our ageing parents. I remember when my mum finally got a smartphone. Or rather, she surrendered to the idea after I needled and begged her to buy one. She finally gave in after I had resorted to making threats of being cut off from communication with me during an upcoming holiday, as I’d be using cheaper alternative of sending messages through the WhatsApp program along my travels, and this required a smartphone. So here’s my story of teaching ageing parents to use a smartphone.

She brought it over with her, still in its box, when she was visiting me in Sydney from Johannesburg – giving us just three weeks for her to become proficient in using the device she’d named “The Tarantula” as it was black, scary and she didn’t want to touch it. Just the process of swiping and tapping rather than clicking the predicable buttons of her old-school Nokia was a lesson in itself. Then there was the QWERTY phone keyboard, which she wasn’t familiar with, as someone who’d never learned how to type or use a computer. Finding uppercase letters and learning where the symbols and numbers are was another major adjustment for her. “Why can’t I just press the buttons like on my old phone, give it back to me,” she wailed at one point. Teaching ageing parents to use a smartphone was going to be harder than I thought.

Then, something magical happened. My brother sent her photos of his sons. For the first time she could get them on her phone simply by tapping on the message. She could make their faces bigger and lovingly trace their features.  The five-year old left a couple of WhatsApp voice recordings telling his “Ouma” his news about building Lego rockets and warnings to look out for box jellyfish while she was in Australia.

Suddenly, she was hooked. She started sharing photos that she’d taken on her holiday back with her friends in South Africa and they replied quickly with their news and messages. Compared to previous trips, she was suddenly connected to her close community of friends and family members and wasn’t feeling isolated from being so far away from them. I knew we’d achieved success when she announced that The Tarantula was now being renamed to Alice in Wonderland!

Many nights I’d be in the kitchen making dinner, where she’d be sitting at the table tapping away while the phone regularly beeped with a raft of incoming messages. I joked that, just like with any modern teenager, I’d have to limit her screen time and that anyone looking in the window at that time would do a double-take as they saw the younger person doing the chores and cooking, while the older one was glued intently to their smartphone. I was so proud of her and truly blown away by how quickly she’d picked it up, within just a matter of days.

However, showing her the possibilities of the new technology after giving up her “nana phone” meant I learnt as much about her and myself, as she did about her new Samsung Galaxy. For this was truly a role-reversing experience. My mother, who’d I’d learned so much from over the course of my life, was suddenly fully dependent on me for teaching her skills that were second-nature to me.

One of the biggest insights I had during this experience was that just like with any human interaction, one word said unkindly can unravel a relationship. I had to take my dose of patience tablets every morning to ensure that yet another question about something she was easily doing the day before didn’t burst her confidence because of my frustration. Just as she must have done for me endless times when I was learning to go to the toilet by myself or read when I was a child.

Secondly, my mum’s skills of being a Year One teacher for over forty years seemed to have rubbed off on me a little. It was so rewarding to see her progress from not knowing how to even turn the phone on, to enjoying the social connection offered by sharing photos and messages with friends. Who knew teaching ageing parents to use a smartphone could be so rewarding?

Coincidentally, I’d asked her to teach me to crochet if I taught her how to use the smartphone in a skills-swap, as she makes beautiful blankets and I’d wanted to learn this skill. Yet I was totally bamboozled by a simple crochet hook and ball of yarn, so, embarrassingly, by the end of the holiday mum was able to share multimedia with the world while I was still struggling with making chain stitches! Swiping, clicking and tapping on screens comes second nature to me but I had to go back to basics to learn how to make granny squares.

https://beconnected.esafety.gov.au/ – Be Connected is an Australian government initiative committed to increasing the confidence, skills and online safety of older Australian. Its website has online courses to teach older Australians the basics of using digital devices and engaging with the internet. In addition, it links people to community organisations that can offer face-to-face help and support as well as supporting families to mentor a relative or friend to help them be more connected online.

Important note: This article is subject to copyright. Carers’ Circle is an Australian website and the information in this article might be specific to Australia. We do not provide health, legal, financial or other advice and this article should not be used for making decisions. You and others should seek advice from suitably qualified professionals. Any use you make of this article is at your own risk and to the extent permitted by law we disclaim all liability in connection with this article. You should read the Terms of use page on carerscircle.com.au for more details about this and the basis on which this article is provided.

Grazia Pecoraro runs her own inclusion and diversity consulting business – Perspective Hive, in Sydney, Australia. She has an Honours degree in Communications majoring in English and Journalism (University of Johannesburg) and loves writing, cooking and travelling. She has completed a memoir to mark the idiosyncrasies of growing up with a Southern Italian father and been published on websites including Role Reboot and Mamamia. She is still working on mastering the art of crochet.