How using a key safe can help keep our parents safe

Categories: Everyday caring, Help at home, Helpful hints, I need help with my parent now, My parent is just getting older, Where to startBy Michelle Chaperon29 March 2021Leave a comment 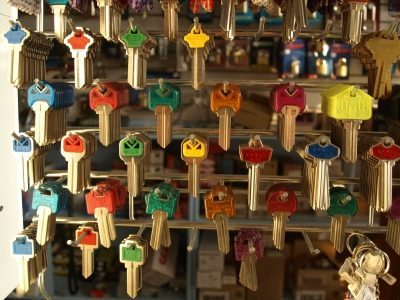 While mum or dad might seem very independent or they are doing well, sometimes emergencies happen. Using a key safe so that a spare key is accessible is going to be a lot more practical than the spare key you might have on your keyring.

We once had a situation where Dad didn’t answer the door to his carer. After a few frantic phone calls, the end result was that the police went to his house and gained entry by kicking down the back door. Turns out that Dad was fine – but the door wasn’t.

Now Dad’s health and safety was more important than the door, but there’s an easier way which causes less stress and damage – a key safe.

A key safe is a metal box with a combination code that holds keys inside. They can be wall mounted, or portable in order to fit on a door knob, fence, or railing.

While they are generally secure, it’s important that not too many people know about it or know the code. Some prefer that the key safe isn’t too visible, but on the other hand, you may like to have the key safe out in the open so if someone is attempting to tamper with it, they can be seen. The choice is yours.

We bought our Dad his before key safes were common place and online shopping was so prevalent and easy. My sister found this one from Keywatch Systems in Queensland. Other companies sell them too, this is just the one we went with. It was delivered to us and we installed it in no time. They are now much easier to come by either online or in store – there’s even a good range at Bunnings.

How to use your key safe

We kept Dad’s key safe for emergencies only, as Dad wanted to control who came into his home and when. He didn’t just want people to help themselves in, which is completely understandable. If Dad didn’t answer the door or phone again to a visitor, the person trying to gain access could call us, and if required, we’d give them the code and they could get the key. The great thing is the code on the lock can be reset too so that you can keep the key secure.

Your parent may decide that they want to give the code to a carer, cleaner or other people who might need access more often. This might be because they can’t get up quickly and easily to answer the door and could hep reduce falls. Just be clear about who has the code as you wouldn’t want to share it out to too many people. You also want to make sure the person using the key knocks and/or calls and announces themselves before letting themselves in, so as to respect your parent’s privacy. This would also help reduce surprise or shock that someone is in their home.