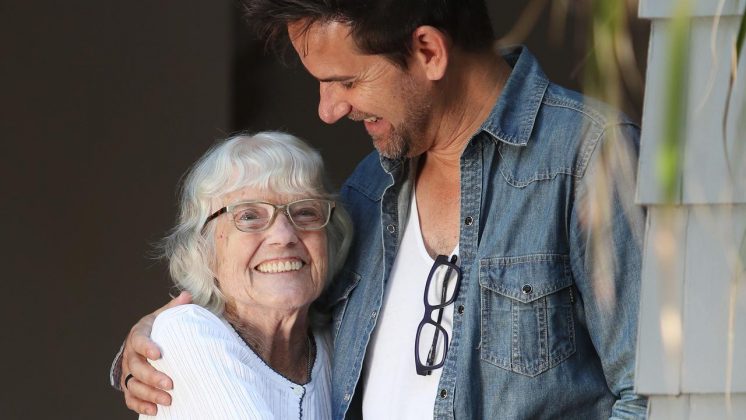 Everybody’s dementia care journey is different, but there are some elements that are common to all who are caring for someone with dementia. My journey with my Dad is very different from the van Genderen family’s, who have been brave enough to share their story as carers of Jason’s mum Hendrika “Puck” van Genderen, who lived with Alzheimer’s and vascular dementia. First through their Facebook page Oma’s Applesauce and now through the documentary film Everybody’s Oma.

Like millions around the world, I first came to “know” Oma (Dutch for grandmother) and the van Genderen family during one of the Covid lockdowns of 2020. It was when I saw a video on Facebook of her shopping at home. Jason, his wife Megan and children Arty and Evie had set up a shop for Oma so she could remember how to do the shopping.

Routine is very important for people with Alzheimer’s and vascular dementia, so Oma not being able to do her weekly shop was impacting her cognitive abilities.

I was touched by the love and playfulness the family showed Oma in their attempt to help manage something quite serious – cognitive decline. Her love for them and playfulness shone through in return.

Through their Facebook page, Jason and Megan shared some beautiful moments they created for Oma, in the hope they would brighten people’s days and give other carers living in lockdown, some ideas. They also shared some of the tougher moments, to educate people about the challenges.

Now through their documentary, they are sharing more about the carers’ journey.

Sharing the challenges of caring for someone with dementia

As an avid follower of Oma’s Applesauce and a listener to their podcast – The Forgettable Half Hour, I thought I was across the number of dementia care challenges they were facing and the decline that was taking place. Jason and Megan had been so forthcoming with information to help other carers in the same situation and to educate others. While I heard it, it wasn’t until I saw some of the footage, did I really grasp the enormity of it all.

Watching the documentary Everybody’s Oma in the cinema, I was confronted by some of the footage of the falls, the injuries and the round the clock care they eventually needed to give Oma. While in my head, I knew all of this, and remembered the good and bad days with my own Dad, seeing it in this way really made me think about what Alzheimer’s does not only to the people who live with it, but their carers as well. It made me feel like I just wanted to give them all a hug.

Including this confronting footage was a positive, not a bad thing, as it gives people a real insight into the challenges of being a carer for someone with dementia. When deciding what videos to show to the world, Jason, Megan and the production team were guided by three rules:
1. Was the footage made with love?
2. Would it educate people about dementia?
3. Would Oma have approved if her cognitive abilities were sound?

Some great questions for carers to consider

When learning about these questions, I was struck how they could be easily tweaked for anyone caring for someone with dementia or other cognitive decline. They could be adjusted to consider any action with their loved one – not be specific to filming or educating. In fact, they are pretty relatable for all children of ageing parents.

1. Is the action being taken made with love?
2. Would your loved one have approved if their cognitive abilities were sound?

Another question to consider is –
What is the impact this will have on my own wellbeing as a carer?

While many people, including Jason and Megan make sacrifices to care for their loved one, there will be times when you have to put your own wellbeing first and practice some self-care.

Learning from others who are caring for someone with dementia

The carers journey can be a lonely one, particularly in dementia care. More often than not, people don’t recognise themselves as carers early enough. We just consider ourselves sons or daughters, or family or friends.

Oma’s story has resonated with so many people from around the world because people identify with it. Either they are caring for loved ones and are on their own dementia care journey, or Oma reminds them of their grandmother or mother.

The film was both heartwarming and heartbreaking – but so is life caring for someone with dementia.

I’m just grateful that Jason and Megan decided to share their story. I hope you get to enjoy it too. If you watch the credits to the end, you’ll even see my Dad. It’s out in cinemas from 11 August, 2022.

As we’re fully transparent, Carers’ Circle was one of the 727 backers of the crowdfunding campaign that helped support the film’s production. We did this because we believe in the power of sharing information and stories to help others in the same situation. That’s why we started and continue with Carers’ Circle. Through this wonderful film, we got to know Jason, Megan and their family and realised we’re on the same page when it comes to helping people living with dementia and importantly, their carers. So you might recognise Megan’s name on our site – she’s now a regular contributor to Carers’ Circle, sharing her expertise as a nutritionist. We’re looking to see how else we can support each other and our respective communities so this isn’t a one off.

Where you can find out more about the Everybody’s Oma documentary, including where it’s screening – https://www.everybodysoma.com/

Watch the movie trailer to get a glimpse of the love and playfulness Oma and Jason have for each other – https://www.everybodysoma.com/trailer

Dementia Australia – a great source of information, education and services for people living with dementia and their carers – https://www.dementia.org.au/

Megan’s curation of recipes designed for her mother-in-law Oma. They can help you too – https://www.meganvangenderen.com/omas-special-recipes

Megan’s article on Carer’s Circle – 3 ways to help your cared one finish their meal – and why this is so important
https://carerscircle.com.au/2021/09/13/3-ways-to-help-your-cared-one-finish-their-meal-and-why-this-is-so-important/

Carer’s Circle article on Six tips for caring for someone with dementia –
https://carerscircle.com.au/2021/09/19/six-tips-for-caring-for-someone-with-dementia/

The Forgettable half hour – a podcast by Jason and Megan sharing what life is like as a carer – https://podcasts.apple.com/au/podcast/the-forgettable-half-hour/id1554787798